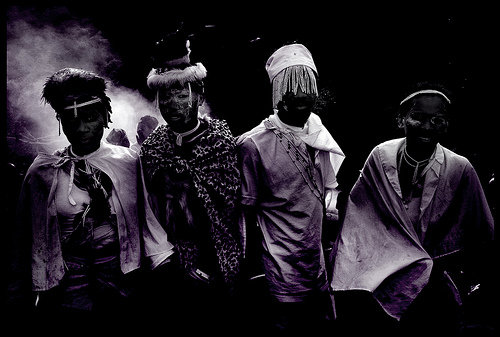 My prior knowledge of sangomas comes mainly from chatting with my medical doctor friends and a Carte Blanche episode on South African television which I watched about a year back. From these fleeting experiences, their reputation does not sit well with me, even though I am relatively open-minded when it comes to alternative therapies.

Traditional ‘healers’ are revered and respected members of the community and yet I hear of many stories where infants and babies arrive at hospitals, dead or dying, and if not dead severely dehydrated, vomiting and many with pronounced signs of colitis (inflammation of the colon). Depending on the severity of the individual cases, medical staff battle to keep these children alive; their internal systems are sometimes so toxic from whatever they have either ingested (or been given as an enema) that their body pH level is sometimes more acidic than that of a cadaver, which in turn affects many of the body’s natural processes – enzyme operation, oxygen delivery, mineral assimilation to name but a few. Meanwhile the ‘culprit’ sangoma continues to hand out the death medicine, chant, beat drums and do everything else that they shouldn’t be doing. Whoops..cynicism fart!

I have never met a real-life sangoma, although coming back to the ‘revered and respected’ part of the previous paragraph I can understand how parents and other members of the communities behave around sangomas. Mention of connections with the afterlife and links to past ancestors, as well as reading about some of the spiritual and symbolic rituals which sangomas perform (especially the ones involving trances) is enough to give anyone the willies when going to sleep at night. I wouldn’t want to upset my ancestors too if I knew they’d be back to haunt me! What I fail to grasp is the fact that if there is a ‘bad’ sangoma in town and the ‘bad’ reputation spreads – why would you choose to go to see him/her? It’s like a bad restaurant – if the food sucks, or your friends tell you that the food give you the runs, would you still go?

I decided to research the matter further and it turns out that ‘real’ sangomas have to go through a serious amount of training (Thwasa) before ‘graduating’ to become a fully fledged sangoma. Their roles in the community can also extend far beyond that of traditional healing; to directing rituals, narrating history, counselling and even working with western medical teams to try and help limit the spread of HIV and Aids though education. The outside-world-looking-in might view sangomas as witch doctors who meddle in the dark arts, however this is largely a misguided conception and one which probably developed through some form of media sensationalism. 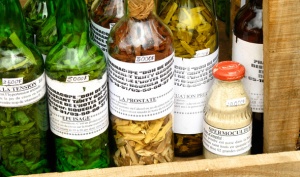 Sangomas use ‘medicine with spiritual significance’, known as Muti to cure everyday ailments and illness and can be administered in various fashions. Muti can be made from sand, animal and plant extracts, the latter forming the basis for many western medicines. If unpractised and administered incorrectly, Muti obviously leads to the problems and hospital cases which I frequently hear about. The funny thing is that, what may have initially started out as a patient stomach bug or something as minor as a headache can develop into something much more severe, i.e. death, with its use. Community members will then cast their beliefs aside and go to the hospital in order to seek westernised treatment.

One thing that any fledgling foreigner will quickly learn in South Africa (and Africa) is that where there is money to be made, there will undoubtedly be someone around trying to ‘do a deal’ or take you on a mini adventure. It is a sad fact that whilst there are probably many genuine sangomas who are good at what they do, receive the correct training and work hard to earn their reputations, charlatans still end up tarnishing their names  (admittedly there are probably sangomas who are just not that good at what they do, although mean well). In comparison to the wages of their clients, sangomas can charge an extortionate amount of money for their services and this is the reason behind why many charlatans have chosen to exploit the profession and age-old tradition in order to make a quick buck.