Vehicle hijacking is a popular pastime amongst the delinquent social class of South African society. Come to think about it; what else would an unemployed, fit and healthy individual with time to spare do on an otherwise uneventful day? The legal options are very limited indeed.

A recent census amongst primary school truants revealed that 86.7% of such individuals (remembering that 90% of all statistical data is utter codswallop) craved employment in an organised carjacking syndicate. One of the prerequisites of such a ‘job’ is that an individual must apply only after flunking their first term of high school and should not be able to do their 2 Times Table. Credit must be given where credit is due however; successful candidates are offered a sure-fire way of securing a lucrative salary and even spoiling themselves by occasionally driving the car of their dreams, i.e. one with an engine and four wheels. Bonus points are up for grabs in the syndicate’s ‘high-roller’ league table if the stolen car happens to sport either a Toyota or VW badge.

The only downside to the job is that during the hijacking process you could wind up being arrested, shot and/or killed by either a police task force, or angry car owner who happens keeps a sawn-off shotgun handy under his seat. On this note, a doctor friend of mine told me a story of how a wannabee-hijacker had unsuccessfully tried to hijack a vehicle; afterwards returning to his township abode only to be beaten and stabbed by the community members. Nice one! He ended up in Witbank’s hospital, handcuffed to a gurney where his stab wounds were firstly cleaned with surgical alcohol and then unsympathetically stitched by my friend, an overly-large needle and no anaesthetic. And yes, apparently he winced a little! The Hijacking failure was then whisked off the premises by two police officers (hopefully to some pee-smelling, rat-infested hole in the ground).

Unfortunately my other friend, who owns the Hilux featured in one of my earlier posts, had his pride and joy stolen for the very reason that it was a Toyota (I keep telling him that he should drive a Navara). His bakkie was parked out-front of a busy gym in Centurion and CCTV camera footage filmed the entire event. It was a remarkable slick operation and due to his platinum gym-membership status he was provided with a free-of-charge DVD hardcopy of the footage so that he could pause and rewind the show to his heart’s content. His only complaint was that the video would have been better in HD. Tracker, aka ‘Taking Back Tomorrow’ (or is this case not) couldn’t recover the stolen vehicle owing to the fact that one of their trace vehicles had to be in the vicinity before the thieves located and/or disabled the tracking device?! The process and the business ethics behind this sound slightly flawed, but then what do I know about the vehicle location business?

Read any guidebook on South Africa and somewhere in between the ample bosom of typed white pages can be found a section on the country’s crime ‘horror’ stats, with a focus-piece on carjacking. The guidebook will no doubt advise you to ‘lock all your car doors; rolls windows up to keep out opportunistic hands’ and warnings like ‘don’t drive through areas you are unsure of, especially at night’. It will probably also remind you to be cautious, but not overly paranoid, as the latter could ruin an otherwise nice experience of the country.

Yeah rrrright!! When I first read the Rough Guide to South Africa tourist manual, the first thing my grey matter did was to develop a slight smidgen of paranoia. The enacted scenario went something like this: First-time visitor pulls up to red traffic light; driver held at gunpoint by skellum, whilst RunX is hijacked by Dick Dastardly and his band of merry men. The actual hijack team probably share a brain cell between them and if it wasn’t for the trigger-happy mentality of these individuals, I’m sure one could outwit them in a Scooby-Doo vs bad-guy type fashion.

A’ nippy’ 1.4 litre Toyota RunX (!!) was my chariot during my first week in Johannesburg. Whenever safe to do so I cautiously skipped red robots (traffic lights) at night through my fear of becoming just another hijack statistic. I wasn’t overly paranoid, just completely and utterly. My paranoia was intensified by a story which I heard over the radio involving a couple who had pulled off to the side of the road to change a flat. Unbeknownst to them, the rocks which had caused the flat were placed in their path by hijackers who then laid in wait for such an incident to occur. The outcome wasn’t at all pleasant.

Vehicle hijacking syndicates are usually highly efficient and organised affairs (referring now to the head honchos) with many such businesses fully ISO compliant and boasting industry recognised accreditations, chiefly from HASAA (The Hijacking Association of Southern Africa), with vehicles frequently checked and backed by a full DEKRA AA technical inspection. Many more syndicates recognise the South African Consumer Protection Act’s existence, however won’t necessarily guarantee their products against defects from point of sale onwards (no use keeping that receipt then!). 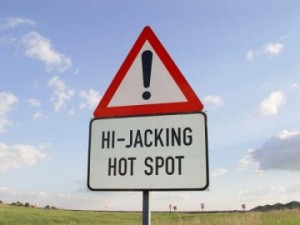 Specific vehicles with particular characteristics are often ordered by the syndicates for predetermined buyers within the South Africa market, and hijacking crews will endeavour to meet the requirements of such orders. A well known and user friendly website exists in plain sight, where you can enter the make and model of the vehicle you require, together with any additional extras which you might fancy – the address if you’re interested is ‘Autotrader.co.za’. Follow your input with “##**123!!” and your search will link directly to Hijacker Syndicate Central. Allow up to 7-10 business days for delivery. As I mentioned earlier, there is a high demand for Toyotas and VWs, so please be patient if you have requested one of these makes; hijackers have a large order list to fulfil, especially on the run-up to Christmas.

For those without internet access, owing to pitiful web connection speeds, high data prices or simply the lack of a computer, ‘Hijacking Hotspot’ signs are clearly visible along most major South African routes. Please take a ticket and wait for your desired car to arrive.

Cars which can’t be sold within South Africa are usually smuggled across the border to be sold in neighbouring African countries, or exchanged for illegal substances. These are usually the likes of Tata’s and Mahindra’s which can at best be traded for a Glad-bag full of sniffable pritt-stick.

Hijacking stats (according to a reliable police informant) are falling, owing to smarter tracker and vehicle immobiliser technologies and bullet-proof-thick smash and grab window films. Anti-hijacking measurers are also finding their way off of the vehicle dealership’s ‘options’ lists and onto the ‘as standard’ features, e.g. flame-throwers mounted under the driver-side door to nicely toast hijacker leg hair and the Taser accessory, which will turn your car’s bodywork into the equivalent of a Star Trek stun gun. Whatever next?! Insurance companies are also coming to the party with over-inflated car premiums in order to recoup their losses, whilst at the same time keeping the number of desirable vehicles on the road to an absolute minimum. Smart eh?

Anyone for hijacker toast?